Quite early in my career as a painter I began examining ways to create narratives in my work. To begin with those developed from my own stories and were essentially biographical. In 2000 my father’s childhood fears and how they impacted his life and death were the source of The Mare’s Tale series of large-scale drawings. In many ways those were mood pieces, with the narratives forming underlying supports to material that for viewers could be interpreted personally and in diverse ways. I think of them now as more like orchestral compositions in which the character of the music carries listeners to their own imaginative spaces. 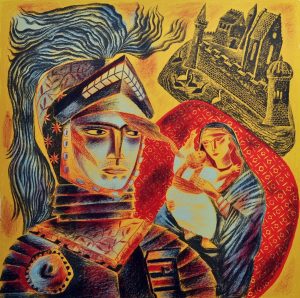 The work on Gawain and the Green Knight has been my most comprehensive and complete exploration of a narrative to date. Using the poem as my guide and inspiration, the intention from the beginning was to make fourteen sequential and editioned prints that would tell the story, though for every print to be stand-alone in the sense that I wanted each to work whether viewed as a single artwork, or as a part of the series.

The process of building an image that encodes not just the narrative ‘moment’, but also has a sense of linkage to what’s transpired and what will come after, takes planning and endless trial and error. Every image has to be built from scratch: composition, colour, tone, and mark-making all serving the narrative. Imagined landscapes, gardens and castles must be conjured, as well as interior spaces and their furnishings. Characters, shown once or repeatedly have to be realised, complete with garments, hairstyles, armour and weaponry. When appearing repeatedly there has to be a balance between keeping a likeness, and yet allowing for physical and psychological change. 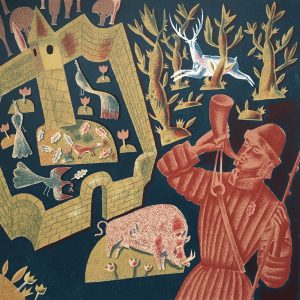 Arthur, Guinevere, the Lord and Lady of Fair Castle and Morgan le Fay each appear just once in the print series, whereas the Green Knight and Gawain occur repeatedly. In the fourteen prints there are three featuring horses, plus images of hunting birds, a stag, a boar, a fox and several peacocks. Each had to fit within this particular imagined world. Then there’s the need to honour the source material, in this case the 2007 translation by Simon Armitage. I wanted to make a visual response to his text rather than try to represent it illustratively, and to do that I had to steep myself in his words over a long period. The small, hardback Faber & Faber first edition was never out of my pocket. I can recite quite long sections of it, committed to memory by repeated reading. 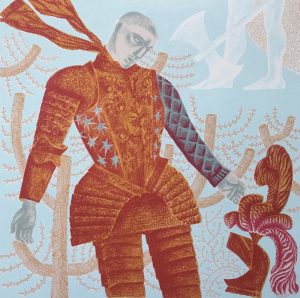 For me responding to a text is all about finding the spaces between the words and then colonising them. I invest the characters and events with my own imagined detailing, layering invented elements onto what’s provided by the text. In this way the enchantress Morgan le Fay, who’s only mentioned in the poem by another character, gets a whole print to
herself, while the Gawain of my images sometimes appears in ways not found in the poem. He binds his wound with the green sash given to him by the Lady of Fair Castle, and by the end of the series his armour has transformed itself with foliate embellishments, while the back of his hand has been marked with a branching stigmata.

Though the prints were not made specifically to accompany the text, I want anyone looking at them while reading it to discover that the words and images are in dialogue. Gawain begins the story as a glittering young knight, unmarked, privileged and unproven. By the end of it his face is shadowed, his hair is shorn to stubble and he is all
too aware of his shortcomings. It’s all there in the title of the final print: The Stain of Sin.

All fourteen prints in the Gawain and the Green Knight series are available from the Martin Tinney Gallery in Cardiff.