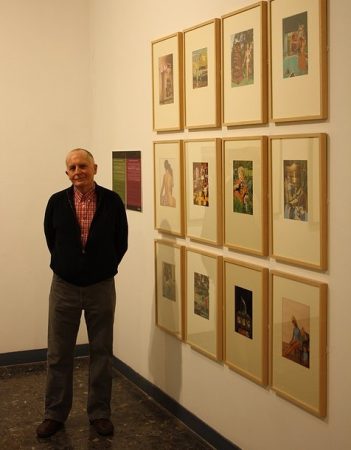 Part of the Celebration of Welsh Contemporary Painting, in partnership with Cyfarthfa Castle and Glasbury Arts.

Ken Elias is one of Wales’ leading artists. Born in 1944, into a working-class family in Glynneath, his childhood was formed during the 1950s. He attended art school in the 1960s, during the height of the Pop Art movement in the UK.

Using acrylic paint, photomontage and mixed media, Elias creates powerful, striking images, with strong shapes and contrasting colours. Influenced by the memories of family and cinema during his 1950s childhood and his love of poetry and art, his work uses memory and imagination, responding to and drawing inspiration from global issues and currents, while also being strongly rooted in the visual language of the south Wales valleys.

In 2009 the National Library of Wales launched a touring retrospective exhibition of his work titled; Ken Elias: A Retrospective – A celebration of 40 years of painting alongside a publication by Seren Books, edited by Ceri Thomas; Ken Elias: Thin Partitions.

In April 2013, Elias’ work was included in a major exhibition at the National Museum of Wales, Cardiff, titled Pop and Abstract, alongside work by David Hockney, Peter Blake, Allen Jones, Bridget Riley and others.

He is both a member of The Welsh Group and the 56 Group Wales.