As a child and youth I was raised in a strictly Welsh Baptist Rhondda Valley culture, immersed in a landscape characterised by miles of snaking terraced streets and glowering mountains. Our family’s way of life was contextualised by non conformist religion and inevitably by the Second World War which began shortly after I was born. It was certainly not an austere environment but there were fundamental beliefs which discouraged materialism and promoted socialism. A lot of religious music and poetry but no visual imagery which could have encouraged idolatry.

So what attracted me later to the colourful cultures of the Mediterranean, North Africa and particularly south India? You might have asked the same of the post impressionists who were influenced by the art of Japan and Africa. But for me it was and still is, more than the excitement of new art forms and imagery. It was as much to do with a whole culture which seemed to be permeated by religious experience, by worship. Traditional crafts which beautifully decorated and enhanced the ‘spiritual world’ occupied by the Deities and their worshipers. Arts ad crafts which appeared to integrate the life of the spirit with many areas of daily living.

When I began to look for religious imagery which supported this I expected to find it in the magnificent Temples and Mosques but to my surprise I unexpectedly found it on the doorsteps of ordinary homes in the Brahmin area of a bustling city. These traditional designs, often reminiscent of Celtic ones, are intended to protect against evil spirits and to welcome guests. They are called Rangoli or Kolam depending on which part of India they are in. They are replaced each week but often the previous design is not completely eradicated, accidentally leaving a shadowy layer beneath the new one. Or the rain might do the same which emphasises the impermanence of these precious images In my work of the 1980’s I had similarly used numerous Celtic designs in large paintings, deconstructed by the painting process to arrive at a new sensation’ 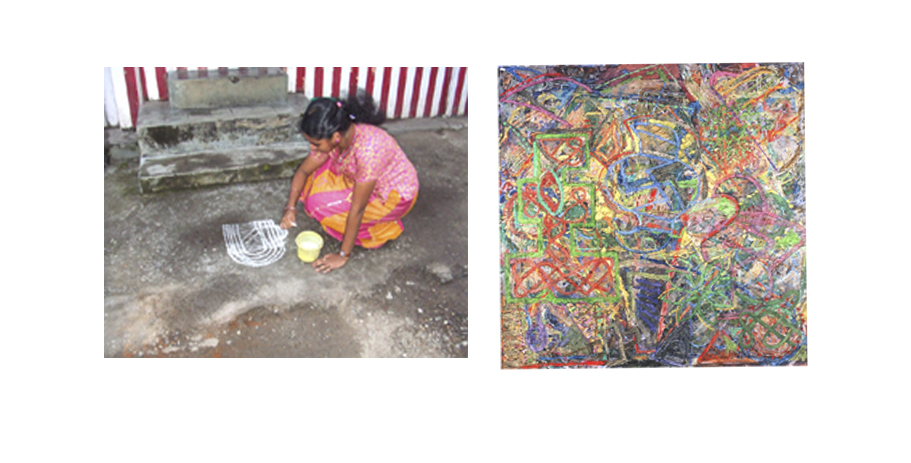 In Rangoli 1 I used many layers of imagery, deconstructed and combined to arrive at a ‘sensation’ which had meaning for me. Different to my earlier large ‘Celtic’ paintings when the designs were used to cover a canvas in a neutral, all over way. I was particularly interested in the purpose of Rangoli. The tradition appears again in the manner in which the political parties are represented on posters and graffiti’

Although my interests are now broader I still absorb the vibrant expressions of the human spirit, particularly when externalised at various festivals The energy, colour, movement together with explosive sound and imagery provide a fertile mix within which I can feed my
imagination and spirit.