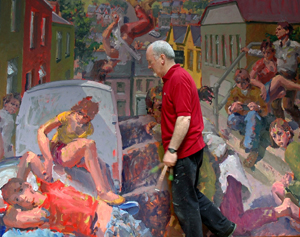 A young Welsh student recently asked me if I had grown up in an artistic home. I said I hadn’t. She looked around the studio and thought for a while and wondered how that could be. I recollected how in the early sixties the youth clubs of South Wales in association with the LEAs used to look out for us kids. For a while there were art and music classes. I could draw and paint, but I had left school early and these places provided mentors, leaders, and characters, that didn’t look or walk the other way. “Oh. The community, then”, my Welsh visitor said.

After some twenty-five years away with more than a few ups and downs, I returned to that very community. It was initially a difficult return, not being exactly what my wife and I had wanted to do. In some ways it was more of a retreat from the challenges that my ambitions demanded I should always meet.  Then, the returning of this native provided many more challenges. The artistic benefits, however, during the last fifteen years have been immense. The inspiration which I have gratefully, if not always humbly, received from my immediate environment, has sometimes seemed like a reward for coming home – the “fatted calf” even. A reward for the recognition and acknowledgement of my debt to the place in which my peculiar adventure began.