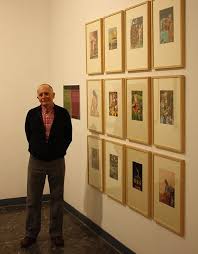 In January 1994 I found myself returning to live quite near to the house where I spent my childhood, and directly opposite the house where my grandmother’s home backed onto  an area of parkland, where I had played as a child, and where the Glynneath Miner’s Welfare Hall housed a cinema, or the “pictures” as it was known locally, and where my Auntie Katy worked as an usherette.

In adulthood these locations still exclude a kind of resonance, and serve repeatedly as places and paintings can happen. It may be said that my revisiting these childhood landmarks, where I played freely as a child, has allowed me to take part in another kind of play, a creative form of play that like childhood play is unhampered by the restriction of logic or common sense, but is of an unmistakably grown up nature: Reclaiming the landscape of childhood with an adult version.

In his essay “How touching in detail. The film of Ken Elias.” Jon Gower writes ….

“This is an experience he ardently and intelligently investigates, time after time. Or at least the memory of this experience. For Elias explores the liminal world testing porosity of the membrane between past and present, between the urgency of now and the slower paced then. Sometimes the membrane is temporary. just a red plush curtain, at others it is as solid as brick.”

More recently, since the publication of Ken Elias: Thin Partitions” by Seren in Septembr 2009 and the tour of a 40 year retrospective exhibition, it has been interesting to notice how themes and techniques of working that were predominant in the early student work, have reappeared in current work.

Elements of collage and photo-montage are renascent, and the use of a simpler and more direct manner of drawing and painting is being restored in my continued endeavour to combine film narrative with personal narrative.