The installation of drawings, “Silver Fields” and an exhibition of panels were shown at the Axa Showcase Gallery, Vyklady. Prague 25.11.17- 04.02.18.

The establishment of a vitrine gallery as part of the frontage of a large hotel in the centre of Prague gave her the opportunity, challenge and freedom of making larger drawings, the selection of drawings for Vyklady, made on ‘silver fields’ of white acrylic to echo the white landscapes -moonlight, rain and mist outside my home and in the mind, recall the mother figure in her own real time, before mine, early relationships and wider association with the mother as an influence in nature, her symbolism in lunar and nature myth and continuation of time through the seasons. The misty space contains no naturalistic perspective, It is a “Floating World” – Dreamtime containing disparate episodes of different scale, which relate only as scattered fragments on a picture surface. 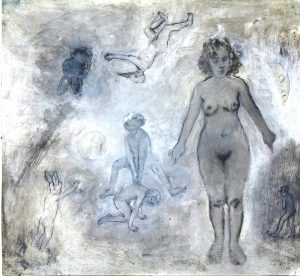 Heather Eastes deploys simple materials sparingly, paper, graphite, while acrylic paint and occasionally fleeting tones of blue, red and brown convene into subtle and delicate works of painterly vein – a pictorial cosmos that is wholly independent. It is the plane where the artist engages intensely with marks, stains and traces of colour and where, for her, they ignite association and memory and in turn, through the working process, these emerge imbodied, the protagonists of the scene.

Heather Eastes pictorial world is populated by faces, heads, bodies, obsessive visual recollections of early relationships and longings, mostly of childhood – the fragile need of community and identity. An invocation of mythological archetypes spiritually and religion, humans, beasts, and God wander through her universe. Metaphors, symbols for early primal relationships and states by the same token they reference the present world, Mother (as goddess, or a distant bird), father (as a god, a devil a dog), child, brother, sister, the male, the female, heaven and earth seek one another, destined to remain apart 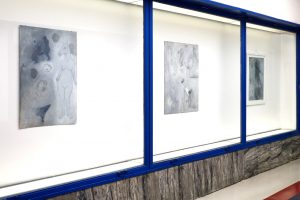